You are here: Home / Archives for Uncategorized

For all members of any Emergency Response Team(FEMA TF Teams, ARES, RACES, CERT and others) we learned early on what we need to take when we deploy.  The standard kit: Clothing, medicines, Comms gear along with backups, First Aide kits, personal care items, sleeping bags/tents, cooking kit, food etc.

Your loadout will depend on what type of deployment you are sent on be it a 1-2 day search and rescue or a multi-week Katrina event.

The common denominator in all of this is the BAG.  I have everything from a small ruck for a day community service event to a large expedition pack used for multi day/week deployments or back packing trips.

One of my favorite places to buy this type of gear besides www.rei.com is www.dovr.com   Dvor is a division of Optics Planet and has great deals that last anywhere from 2 days to all month.

If you are not familiar with 511, they make the best tactical gear and clothing around.  I have been using their stuff for aobut 10 years and love it.

If you choose to, you have the option to use this link which will give me a $5 credit if you buy anything from DVOR.  You are under no obligation to do so however.

Once you sign up at DVOR(its free)you will get a link you can send to your friends and family and if they buy you get $5 for each person buying something.

This is my favorite pack from 511.  Its called the 511 RUSH 72(hours) and is a monster.  This is the bag I carry when I travel for work. It has a GIANT 2894 cubic inches of space and more pocket than you will need to sort you gear. It is compatible with any hydration bladder you might have which makes it a truly all around great pack.  On Amazon it goes for between $149- $260 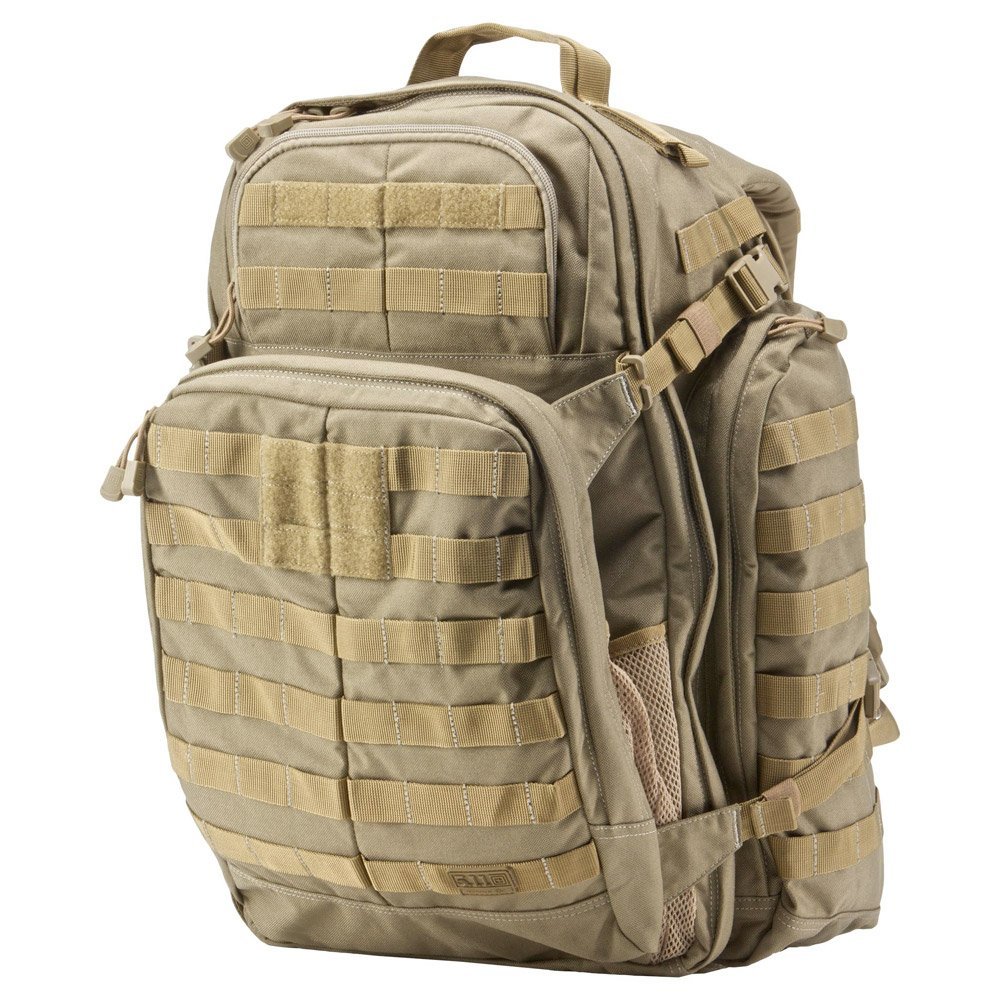 At Dvor it costs $169 but comes with a $65 store credit making the final cost $104 plus shipping.  If you play your cards right and buy something else small and ship, the next order ships for FREE for the next 24 hours.

Here is a link to the 511 site that will give you more details on any of the 511 line.  There is a great video on this page explaining the difference between the RUSH 24, RUSH 48 and the RUSH 72 line of packs.

Let me know what packs or bags you use and why.  I would love to hear about them.

Well at least the government is looking at real life examples of things that could change life as we know it.  The US Military is conducting an exercise with members of the Amateur Radio Community to help us understand what we need to do before a CME or EMP event to protect our communications capabilities to help with what I would assume would be nation wide comms in a Post event world.

Below is a Article from the ARRL(Amateur Radio Relay League), the defacto “management arm” of the FCC when it come to amateur radio or Ham Radio.

After reading this article, let me know if you will take part and what are you plans for such events.

A disastrous coronal mass ejection (CME) will be the focus of a national Military Auxiliary Radio System (MARS) communication exercise in early November, and MARS is hoping to collaborate with Amateur Radio Emergency Service (ARES) and Radio Amateur Civil Emergency Service (RACES) groups. The MARS exercise will get under way on November 8 and continue into November 10. It will be a quarterly contingency HF exercise in support of the US Department of Defense.

“The exercise scenario will simulate a CME event and focus on actions that radio operators should take prior to and following a CME event,” explained Army MARS Program Manager Paul English, WD8DBY. “One thing we want to continue to work on is the interface with the greater Amateur Radio community.”

This week’s bulletin was made possible with information provided by
QRZ DX, the OPDX Bulletin, 425 DX News, The Daily DX, DXNL, Contest Corral from QST and the ARRL Contest Calendar and WA7BNM web sites.
Thanks to all.

VIET NAM, 3W. An international team of Merditerraneo DX Club
members will be QRV as 3W3MD from Da Nang, while some operators will also be QRV as 3W3MD/p from Cham Island, IOTA AS-162, from October 31 to November 9. QSL both calls via IK2VUC.

MADAGASCAR, 5R. Eric, F6ICX will be QRV as 5R8IC from Sainte-Marie Island, IOTA AF-090, from November 1 to December 12. Activity will be on 40 to 10 meters using mostly CW with some SSB, RTTY and PSK.
QSL direct to home call.

ALGERIA, 7X. A group of operators are QRV as 7W6A and 7T9A from the Cap Sigli and Cap Corbelin Lighthouses, respectively, until November
2. QSL both calls via EA3GSS.

PHILIPPINES, DU. Elena, RC5A and Yuri, RM0F will be QRV as DU9/RC5A and DU9/RM0F, respectively, from Siargao Island, IOTA OC-235, from November 1 to 13. Activity will be on all HF bands using CW and SSB.  QSL to home calls.

ARUBA, P4. Special event station P490IARU is QRV until December 22 from various locations in Aruba to commemorate the 90th anniversary of the International Amateur Radio Union. Activity is on all bands using CW, SSB and RTTY. QSL via P43E.

FERNANDO DE NORONHA, PY0F. Janio, PY4NY is QRV as PY0NY until November 5. Activity is on 40 to 10 meters using CW, SSB, and
various digital modes. If conditions allow, he may try 80 and 6
meters as well. QSL direct to home call.

EAST KIRIBATI, T32. Operators KH6OO, W0ZRJ and N0PJV are QRV as T32DX from Captain Cook Hotel on Kirimati Island, IOTA OC-024, until November 3. Activity is on 40 to 10 meters with two stations. QSL via KH6OO.

MONTSERRAT, VP2M. Operators Rick, AI5P, Phil, K3EW and Jim, W3NRJ will be QRV as VP2MXP, VP2MEW and VP2MVI, respectively, from Gingerbread Hill from November 4 to 12. Activity will be on the HF bands. QSL to home calls.

VANUATU, YJ. Barry, VK2BJ will be QRV as YJ0BJ from November 2 to 16. Activity will be on 40 to 6 meters using CW and SSB. QSL
direct to home call.

From my friend John Miklor the Baofeng Guru’s Facebook page

Buyer Alert. Beware of eBay fraud and mislabeling.
I did a search this morning and found vendors selling what looked like and are branded as Baofeng BF-F8HP radios.

Read the fine print carefully. The description states they are two power (Hi/Lo) 4/5W radios with and 1800mAh battery.

A true F8HP is a tri-power (Hi, Med, Low) 1, 4, 8W radio with a high capacity battery.
.
Please Note: This is NOT intended to identify specific vendors as being fraudulent, but rather a Buyer Beware. . . . . . . Read EVERYTHING carefully.
Shipping costs to return a radio back to China exceeds the price of the radio.
I highly recommend buying from a local vendor with local support for peace of mind. 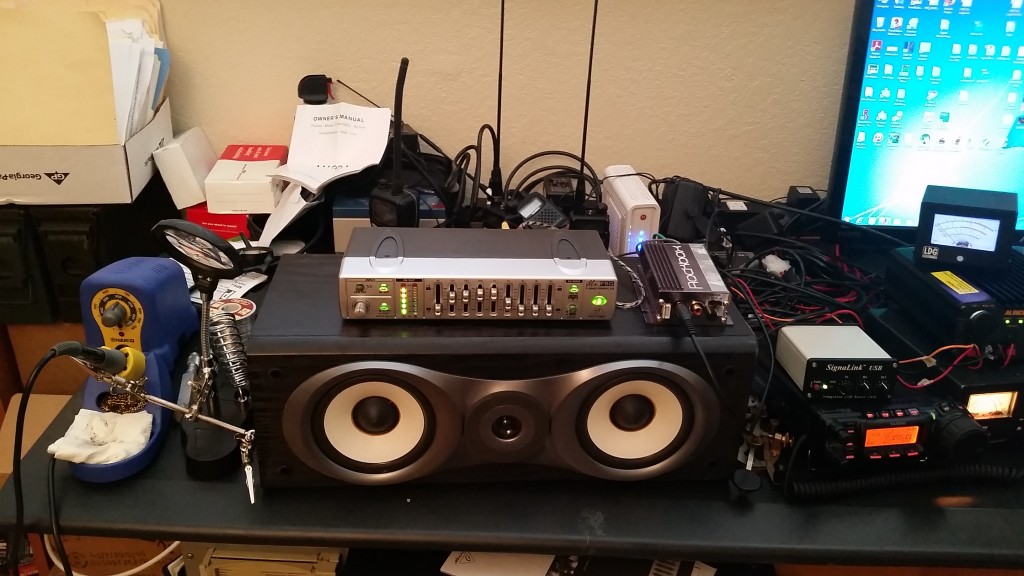 I have been living with a MFJ 281 ClearTone(yea right) http://www.mfjenterprises.com/Product.php?productid=MFJ-281 speaker on my 857D since day one. With the bands so bad and the noise floor so high it drives me crazy to have to have the volume so high just to try to hear a faint QSO. The constant hiss was maddening even when using the DSP controls on the Yaesu 857D.

.
I started looking into Noise Canceling Speakers but the high price and me just starting back to work after 7 months of unemployment, I could not bear to spend the money on one.
The 857D has some “good” DNR functions, but they just don’t cut it with the dinky Cleartone and my ears.

.
I have several Onkyo speakers from a retired Surround Sound system and a 100 watt 12 volt car audio amplifier and started to think on hacking this into something usable.
I picked up a Behringer MINIFBQ800 9 band Graphic Equalizer from Amazon for $70 and after a few hours ended up with this.

.
It actually works quite well and the difference is amazing between this and the Cleartone. This photo is the “bread board” version to be sure it works.  All of the wiring will be cleaned up into a nice clean package at the end of the project. 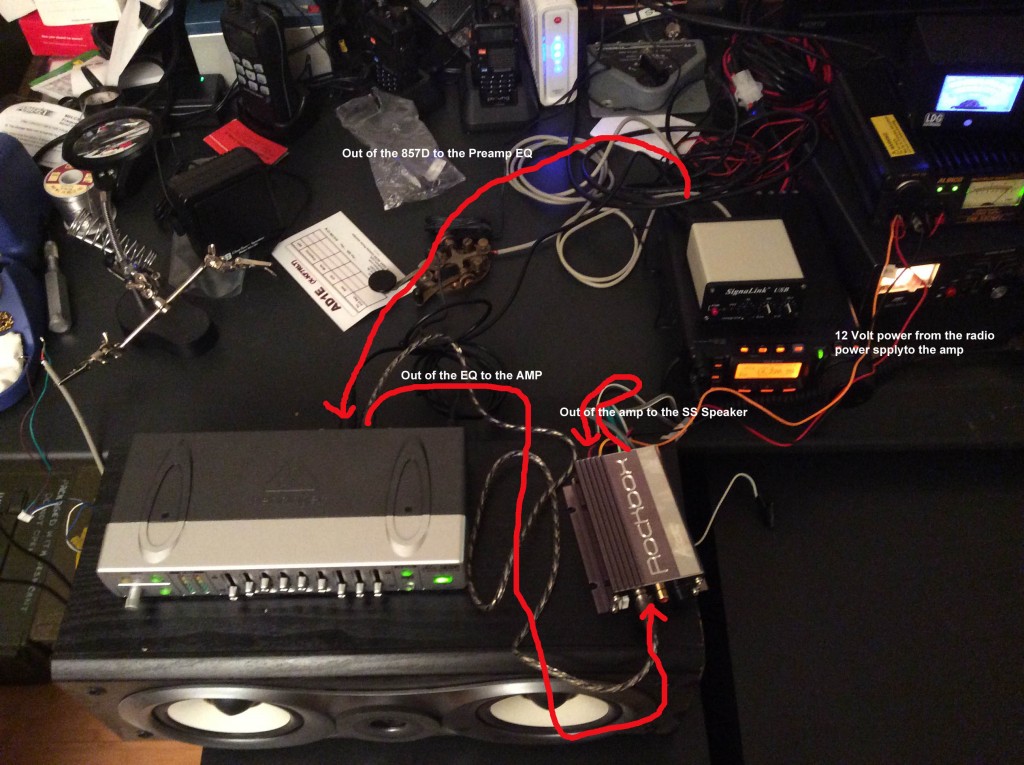 I could have saved some money by buying a cheaper model EQ knowing what bands need to be suppressed, but this one had the best S/N ratio of 95 dB vs some that were in the 60dB range.
The quality of the audio coming out of the radio does not warrant this level of EQ, but more is better right? I ordered this before getting the O Scope program http://www.zeitnitz.eu/scope_en or I would have know that 90% of all the noise is coming in at 2kHz..
Now just looking for the bands to clear and see how this thing works when it opens up.
Here are the parts I used in the system:
The Behringer MINIFBQ FBQ800 9 Channel Equalizer from Amazon $70
The Behringer MINIFBQ FBQ800 9 Channel Equalizer from Amazon $70 one minor issue with this unit is it runs off of 9 volt wall wart. I could probably get it to run off of the radio power supply like the amp does, but….. oh well. 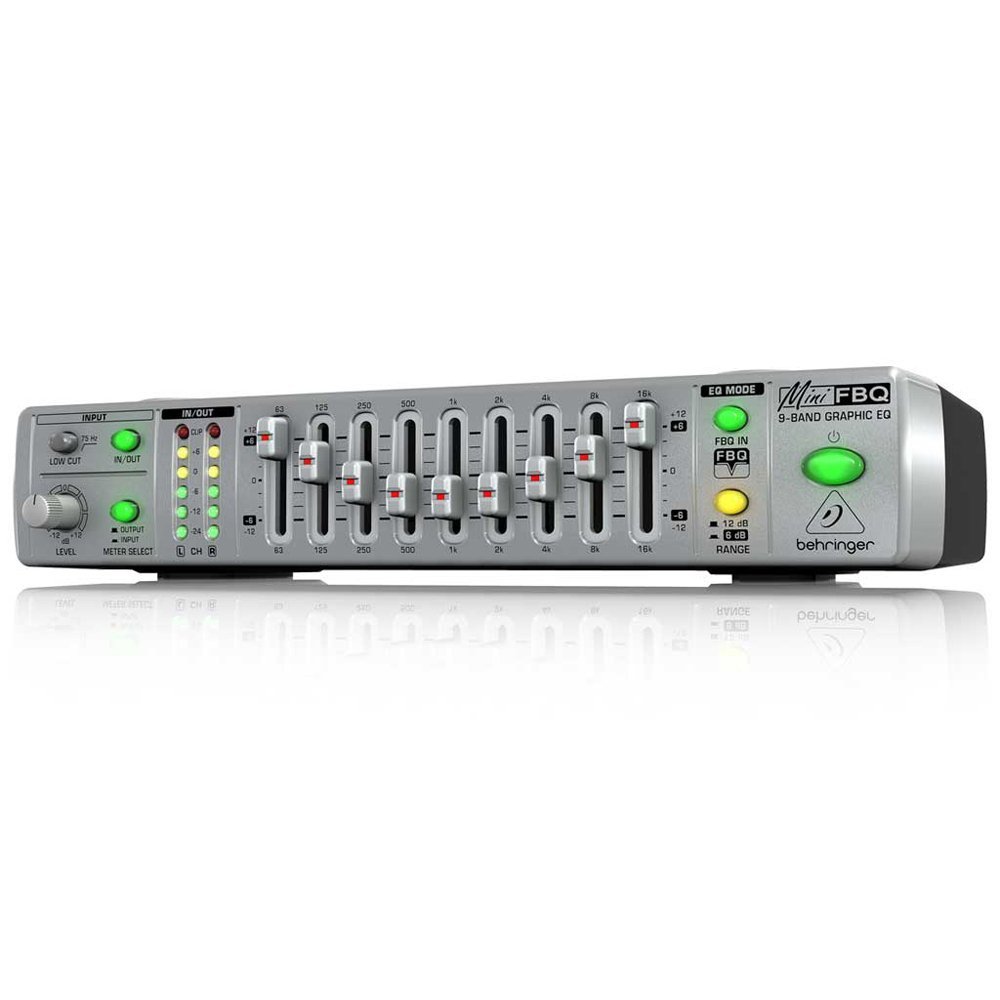 Or the GRAVITY 7 Band Graphic Equalizer GR-EQ9 $34.99 that will run off of your 12 volt power supply
Gravity 7 Band EQ 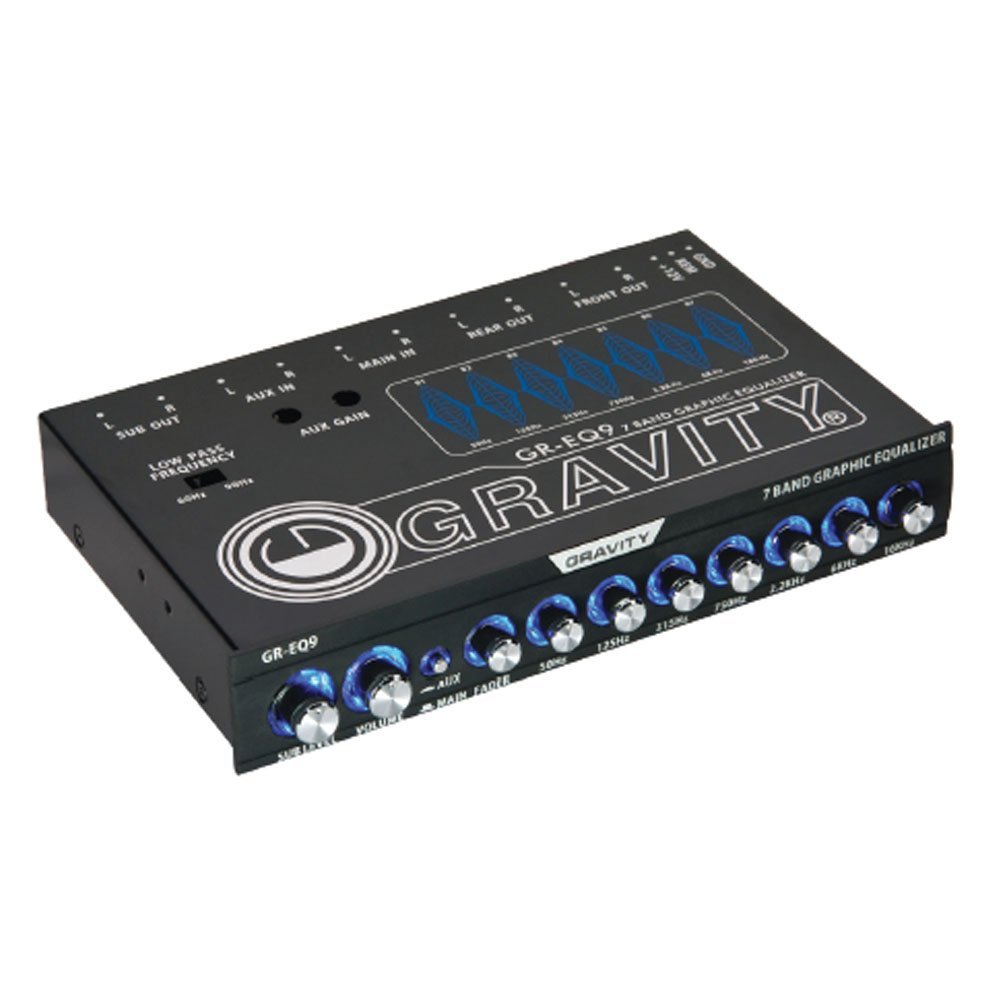 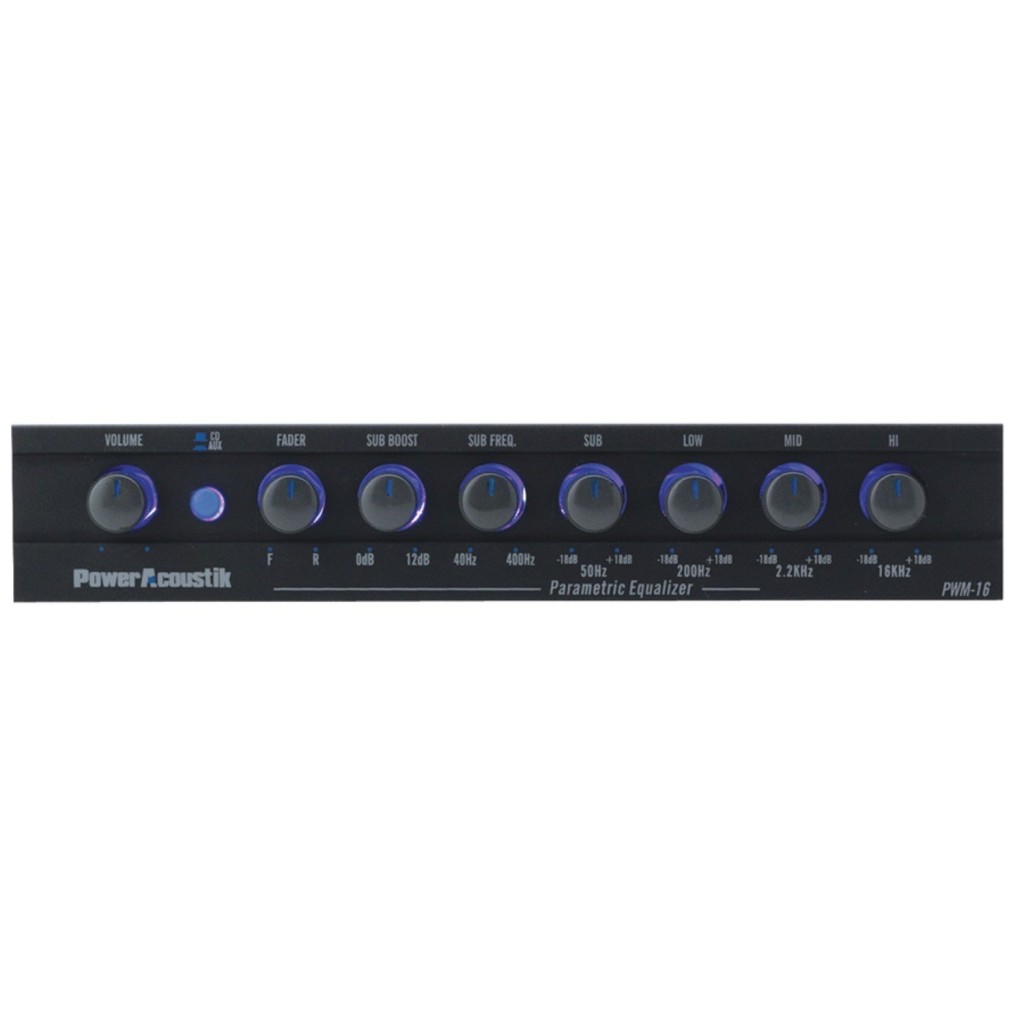 Now as always YMMV(your mileage may vary) meaning I am not saying the these will work with your system. That is up to you to determine. No Warranties expressed or implied.

Since the audio out of any Ham radio is mono/1 channel you can get by with a mono amp, but they are a little harder to find. There are kits you can find to build mono amps or you can buy one already built and be done with it. The amp listed below is exactly the same as I had on hand, but branded under another brand.
Boss Two Channel 100 Watt Power Amp
Boss 2 Channel 100 Watt Power AMP 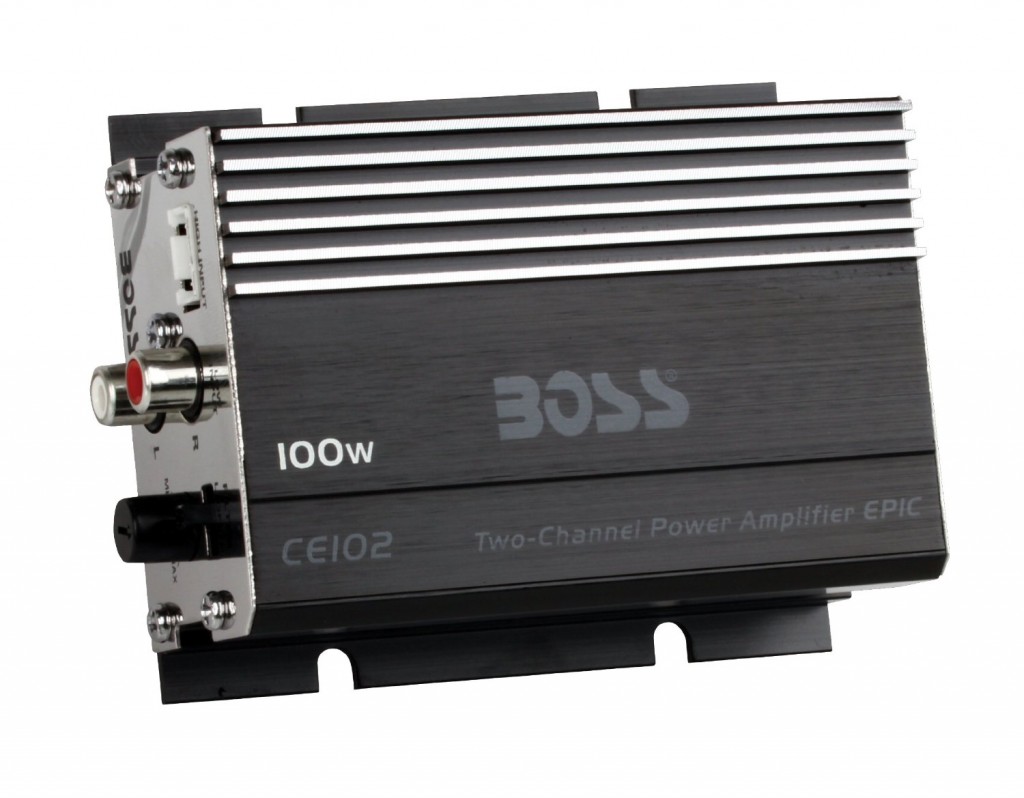 .
Now according to the specs, my Yaesu 857D has 2.5 watts @ 4 ohms which is considered high level, but the volume control can drop this down so that you can use this as a Line Level input, which is what I did. 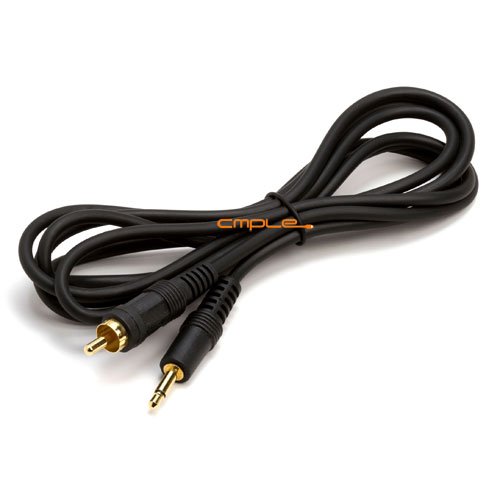 I also bought a RCA cable to split for the mono channel output from the EQ to the Amp.
RCA Cable

So we have the audio out of the Yaesu 857D with the mono 1/8 inch mini to RCA male into the Behringer Equalizer. Out of the EQ with a RAC Male to RCA Male cable to the Amp. Out of the Amp with the supplied speaker wire((s) this is a stereo amp but I am only using one channel)) to the Onkyo Speaker.

A quick video showing how this works will be post shortly.

If you have questions post them.  Remember I am a Mechanical Engineer, so anything electrical should be taken with a grain of salt.

Disclaimer: I do have a Affiliate account at Amazon.  Any link you click on and buy from Amazon, I may get some compensation from Amazon.  This does not cost you anymore money and you are obviously free to shop around to find a better price. 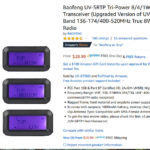 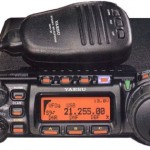